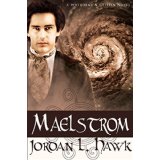 Jordan L Hawk has 3 wonderful paranormal series on the go at the moment with a fourth on the way.  The Whyborne and Griffin books begin with Widdershins which introduces the reader to the main characters.  What I love about them is that they are so three-dimensional, the shy, awkward Whyborne also smart and capable of great bravery while the heroic, adventurous Griffin also has moments of fear and self-doubt.  The stories take place in a Victorian America where magic and strange creatures exist and have fast-paced plots and a spine-chilling atmosphere.   There are 7 books so far.

Jordan L Hawk also has the SPECTR world which has a 6-novella first series, beginning with Hunter of Demons, and has now begun a second series with 2 novellas out so far.  It has a fascinating universe where demons and spirits exist and a scorching romance between paranormal Caleb; Gray, a vampire-like spirit sharing Caleb’s body; and Federal Agent John Starkweather.

Jordan L Hawk’s Spirits series looks as if it will just have the two books, Restless Spirits and Dangerous Spirits, about a psychic, an inventor and a lot of ghosts.  The author also has an introductory novella, The Thirteenth Hex, for her newest Hexworld series, involving a witch and his human shapeshifter familiar, with the first priced book, Hexbreaker, due on 6 May 2016 with a new witch/familiar pairing. 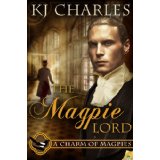 K J Charles has a couple of great supernatural series:  A Charm of Magpies and Rag and Bone, the latter just getting started and set in the same universe where magic exists and can be used to deadly purpose.  The A Charm of Magpies trilogy begins with The Magpie Lord and has an unusual Earl teaming up with a magician to solve the deaths of his father and brother in a compelling AU Victorian England world, the chemistry between the men soon sizzling.  The Rag and Bone series begins with the novella A Queer Trade then has the novel Rag and Bone, both involving a character who accidentally became a warlock and his waste-man lover.

Joanna Chambers’ Somnus series only has one book so far, The Dream Alchemist, but it’s a fascinating idea with people who can enter a different world in their dreams and meet others from the real world who share the same ability.  I’m really hoping for a sequel soon.

Tanya Huff’s Victoria Nelson series isn’t gay – it involves a woman trying to decide between 2 men, a cop and a vampire – but one of the 3 main characters, vampire Henry, is bisexual and through him we meet Tony Foster who gets a spin-off series and a gay romance.  Both series are well written with interesting characters, humour, horror and fast-paced plots, although I did find the central gay romance in the Tony Foster series a bit half-hearted.  The Victoria Nelson series has 5 books, beginning with Blood Price while the Tony Foster trilogy comprises Smoke and Shadows, Smoke and Mirrors and Smoke and Ashes. 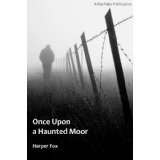 Finally, the Tyack and Frayne Mysteries by Harper Fox begin with the novella, Once Upon a Haunted Moor.  It teams a policeman with a clairvoyant in a contemporary Cornish village and has lovable characters, great descriptions and a suitably spooky atmosphere.  The series has 6 books.

I hope this review provides some entertaining reading and would love to hear suggestions from people of other series they love.