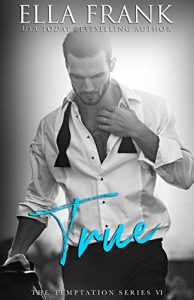 “True (Temptation Book 6)” by Ella Frank – The final part of the popular Tate/Logan contemporary romance is set over the holidays.  Will they finally get their happy ending?

“Just a Bit Shameless (Straight Guys Book 8)” by Alessandra Hazard is part of a series but can be read as a standalone – Thief, Sam Landon, falls for his crime lord boss, Dominic Bommer, unaware that Dominic is actually a fake identity for a CI5 agent.

“My Winter Family (Rose Falls Book 2)” by Raleigh Ruebens – part of a series but can be read as a standalone.  A one-night stand at a wedding turns into more when two very different men – a father with a daughter and a commitment-shy bachelor – keep running into each other in Rose Falls.

“Snow on the Roof” by Sean Ashcroft – a family man and his younger male PA spend a memorable Christmas stuck together in a cabin.

“Eight Nights in December” by Keira Andrews – a virginal student spends the Christmas holiday with his roommate’s family, including the photographer brother, Nate, but will they have a future at the end of the holiday?